The period we live in poses one of the greatest challenges of the twenty-first century: a (hitherto) inscrutable pandemic is sweeping the world, affecting our daily lives to no small extent. Our attitude towards health, illness and the human body has been transformed, and we react more sensitively to the changes around us. Ádám Albert’s exhibition entitled Disconnected – held this summer in Kisterem Gallery – was not meant to reflect on this situation, yet its relevance was unexpectedly augmented by the global pandemic. His latest work is closely connected to his recently exhibited series, not only by its use of material and form, but also by its imaging of the human body and its components. (…) This is demonstrated by the complex of works consisting of two installations, which we can associate with a variety of spatial notions: on the one hand, it recalls an image of the deep-sea world, conjuring up the protruding tendrils of vegetation or the long, translucent tentacles of jellyfish. (…) The dominant material of his installations, the so-called Tardos red marble (actually red limestone) is still quarried in the Gerecse hills of Hungary. (…) Besides being a decorative material that radiates nobility, the stone is made up of layers developed over millions of years, which preserve the signs of passing time: when the stone is cut and polished, it reveals fossilised traces of the living world. Albert leaves such traces concealed in obscurity, and introduces new “life” onto the surface. The organically shaped glass forms stand on the surface like ponderous masses, yet with their filigree, translucent presence, they seem fragile and ephemeral. (…) The limestone blocks may be interpreted as the kind of visual aids used in geological research – this is partly due to their regular rectangular shape, and is reinforced by the welded stainless steel base. The artist, however, generates tension between the two parts – a phenomenon noticeable in his earlier works too –, since the naturalness of the limestone is contrasted with the human-crafted object beneath it. It is a clash between the organic and the geometric (although the delicate support structure is actually thrust into the background beneath the more dominant limestone). (…) In Albert’s coherently constructed system, he creates a completely new world by hybridising materials that we know well, presenting us with a paradoxical notion of space. In it we can discover familiar, visible surfaces, such as mountain ranges, the striated planes of Mars, or scars on the skin, but at the same time it also evokes less visible or completely invisible realms, like the bottom of the ocean, cave crevices, or the internal structures of the human body. There is also dichotomy in the glass statues: we may see them as the oxymoronic concept of “falling up”, or as gushing springs or entities emerging from the ground. At first they seem dynamic and vibrant, but as they are static, they bear witness to their own fragility or to ephemerality in general. (LÉPOLD, Zsanett | 2020) 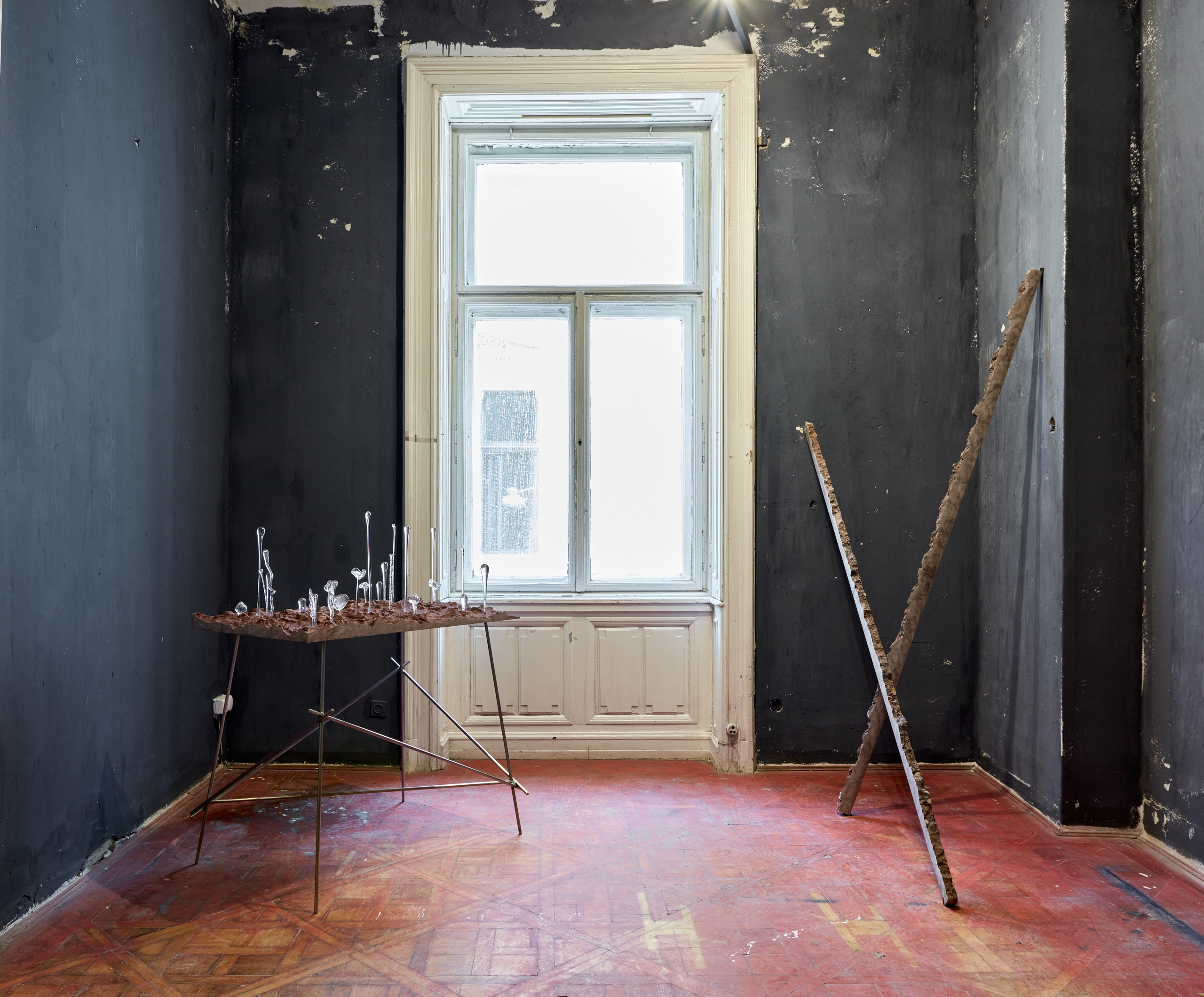 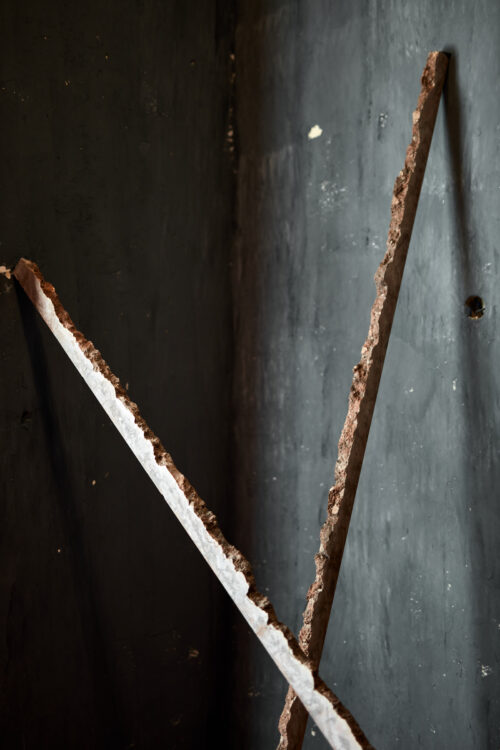 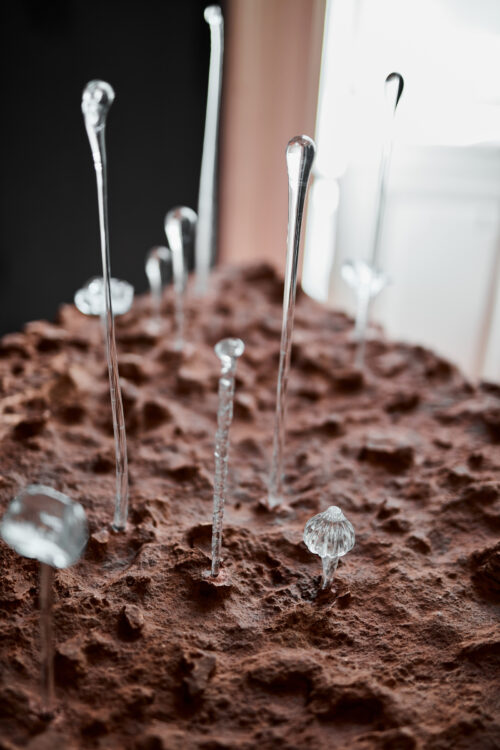 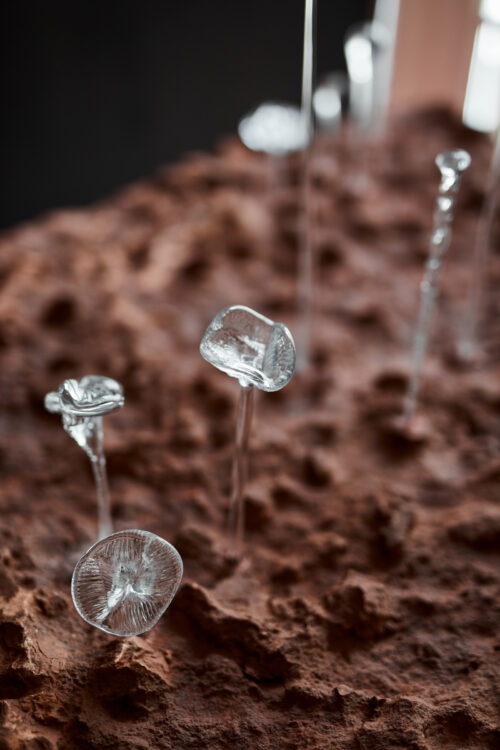 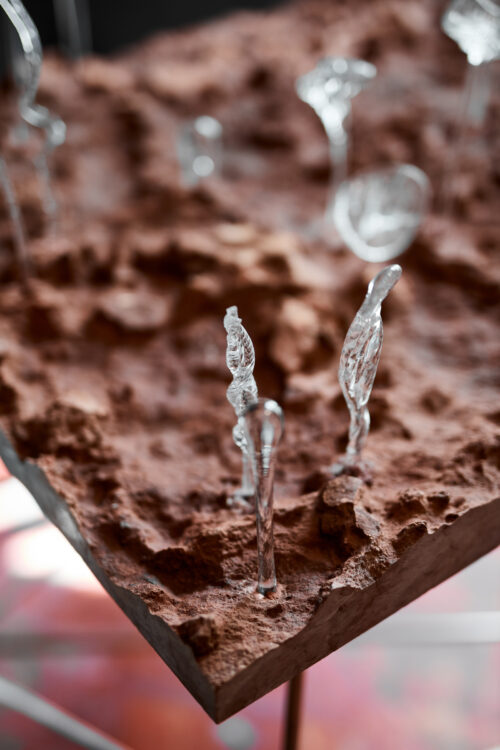 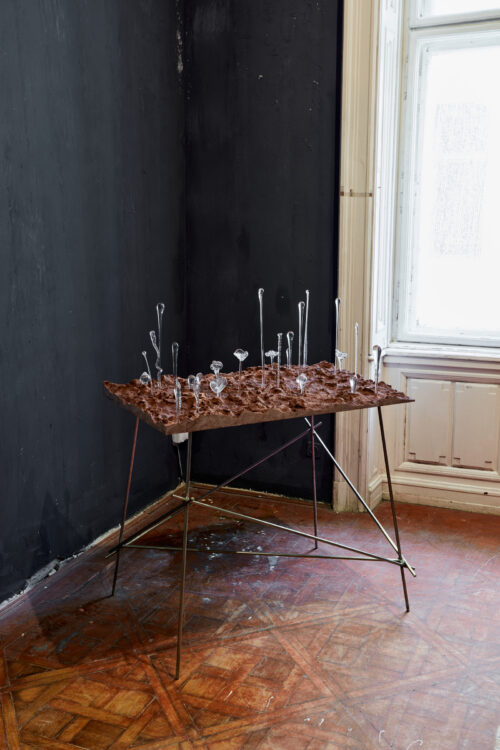 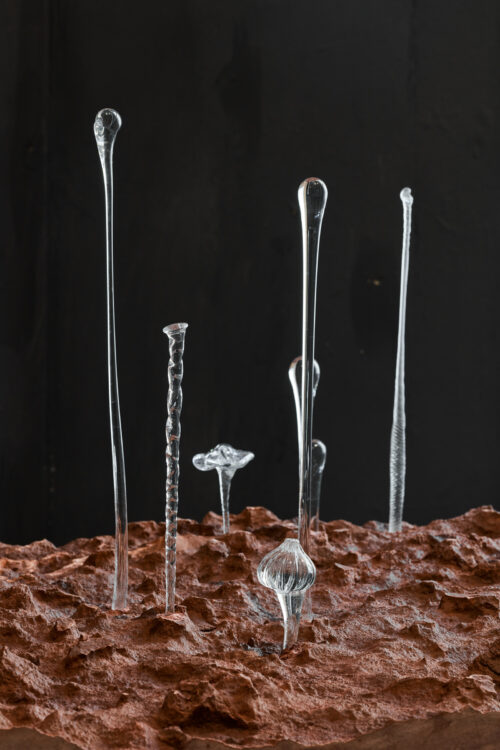